The purpose of mapping the Moon began with a purely practical purpose: “As early as 1628, (Langren) conceived the idea of using the rotation of the moon—rather than its mere position in the sky—as a more accurate celestial clock. By timing the occurrence of sunrise or sunset on identifiable lunar peaks and craters, one would have a nearly continuous set of reference events with which local time could be accurately determined.” .. it required an accurate lunar globe or set of maps that named the peaks, craters, and other lunar features so that they could be easily recognized.

Van Langren spent a few years in the early 1630s at the court in Madrid, during which he attempted to enlist support for this project and made plans for the preparation of a collection of lunar maps and diagrams, together with a “user guide” containing instructions for the calculation of longitude from observations of the lunar features he would catalog. Because he would be the first to comprehensively map the lunar features, he proposed to have “the names of illustrious men applied to the luminous and resplendent mountains and islands of the lunar globe,” a prospect that evidently pleased King Philip”

“Van Langren’s contributions: he initiated the systematic naming of lunar
topography, he applied geographical clustering of names to the moon (areas with objects named after Frenchmen, Venetians, Dutchmen, female royalty, etc), he first used scientists to name lunar objects after, and he first used conceptual names; for land mass names he used concepts like dignity, peace, honour, virtue, work, wisdom and temperance. Finally, he adhered to a hierarchical principle by naming larger objects for more important persons.
In retrospect, he was also the first that used toponymy for propaganda, as most of the names he bestowed reflected the protagonists of the Habsburg power struggle for supremacy in seventeenth century Europe. 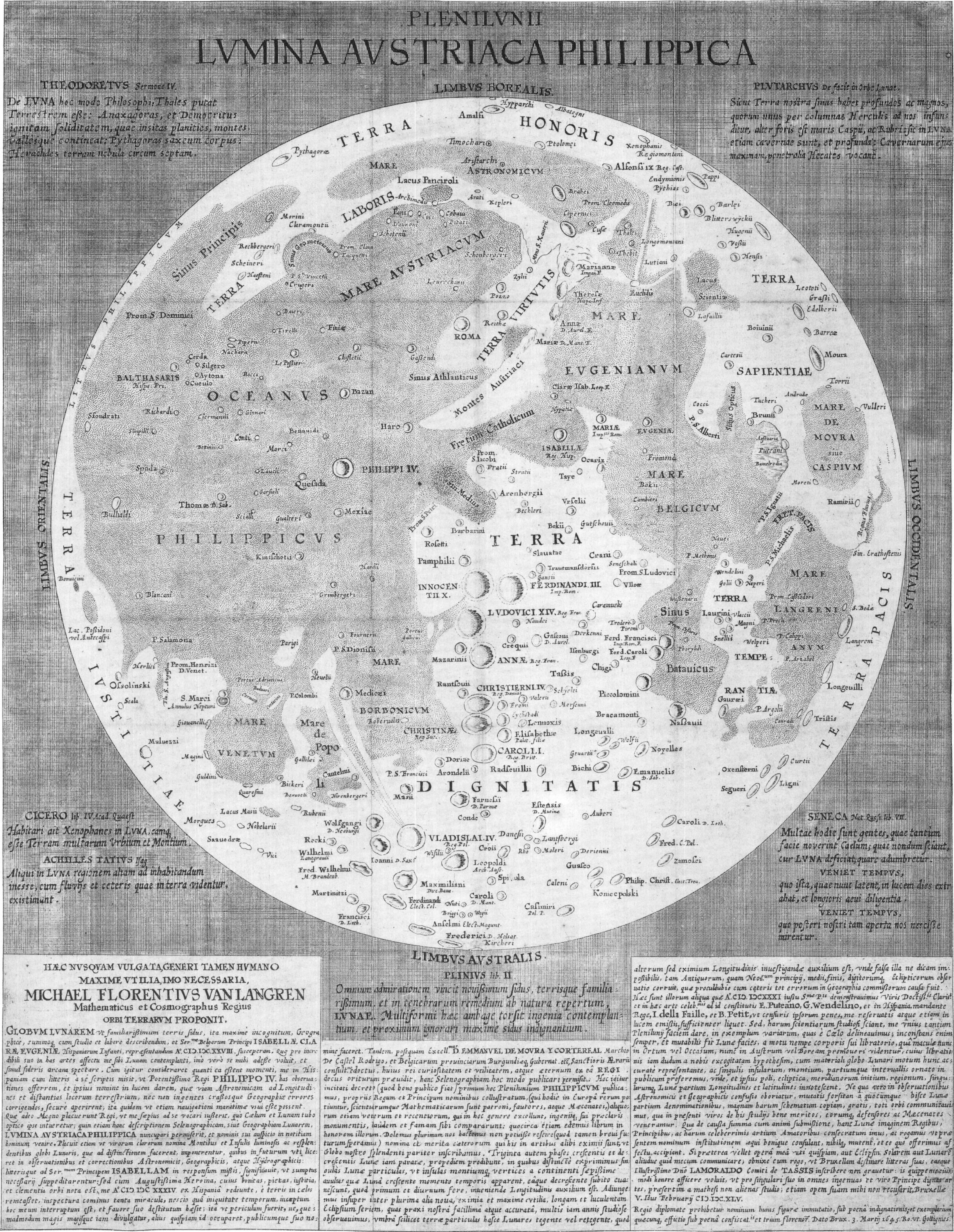 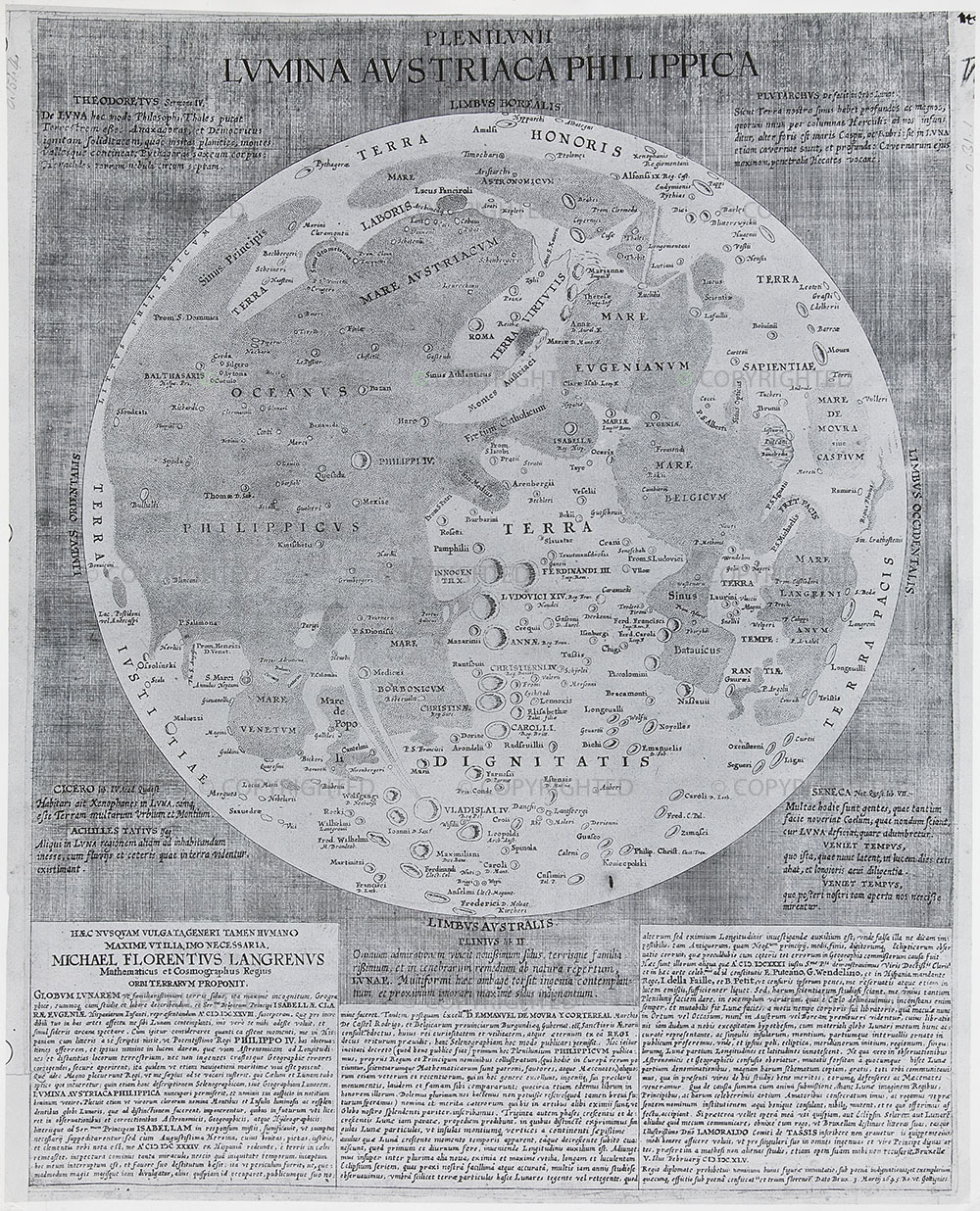 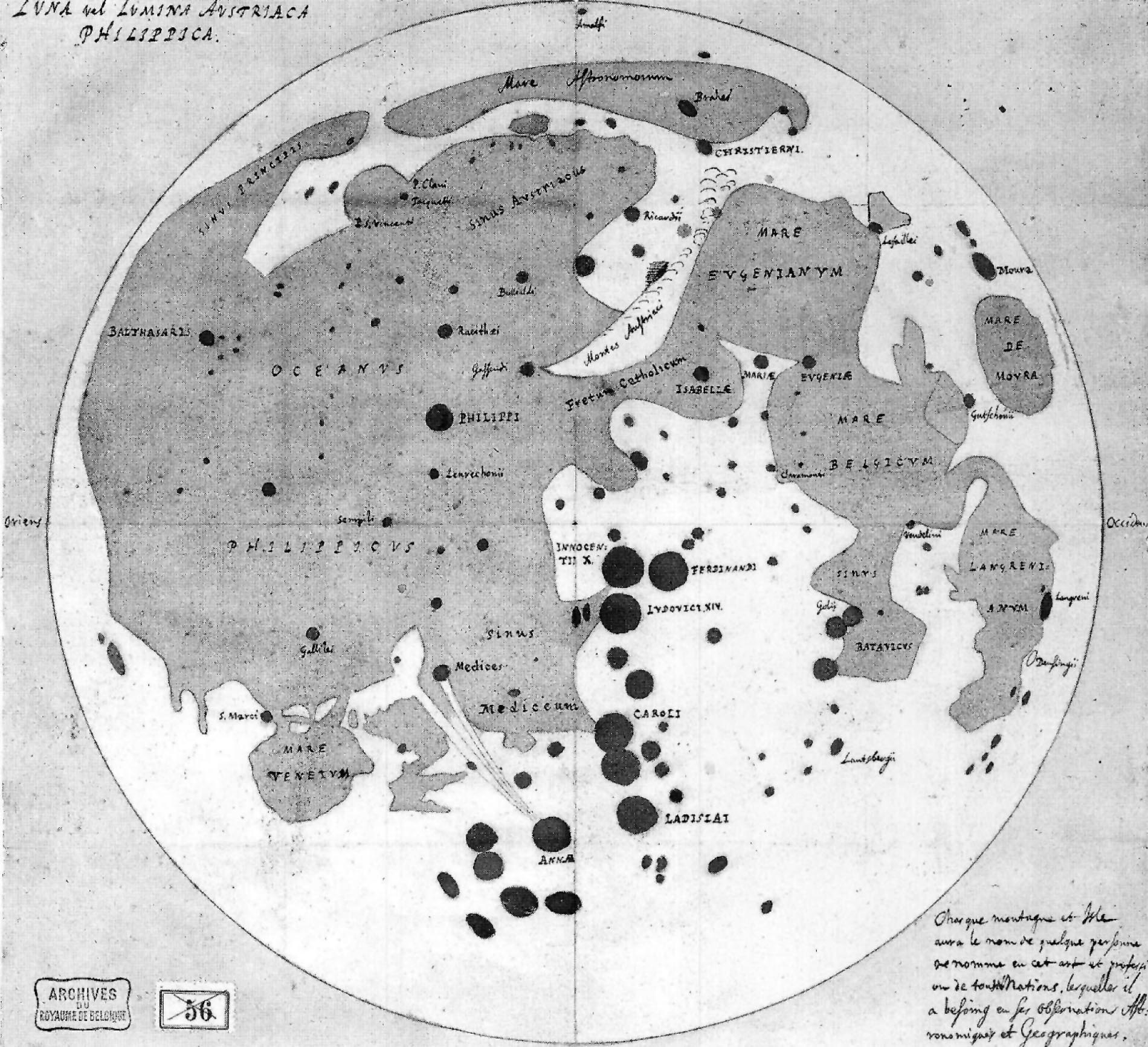 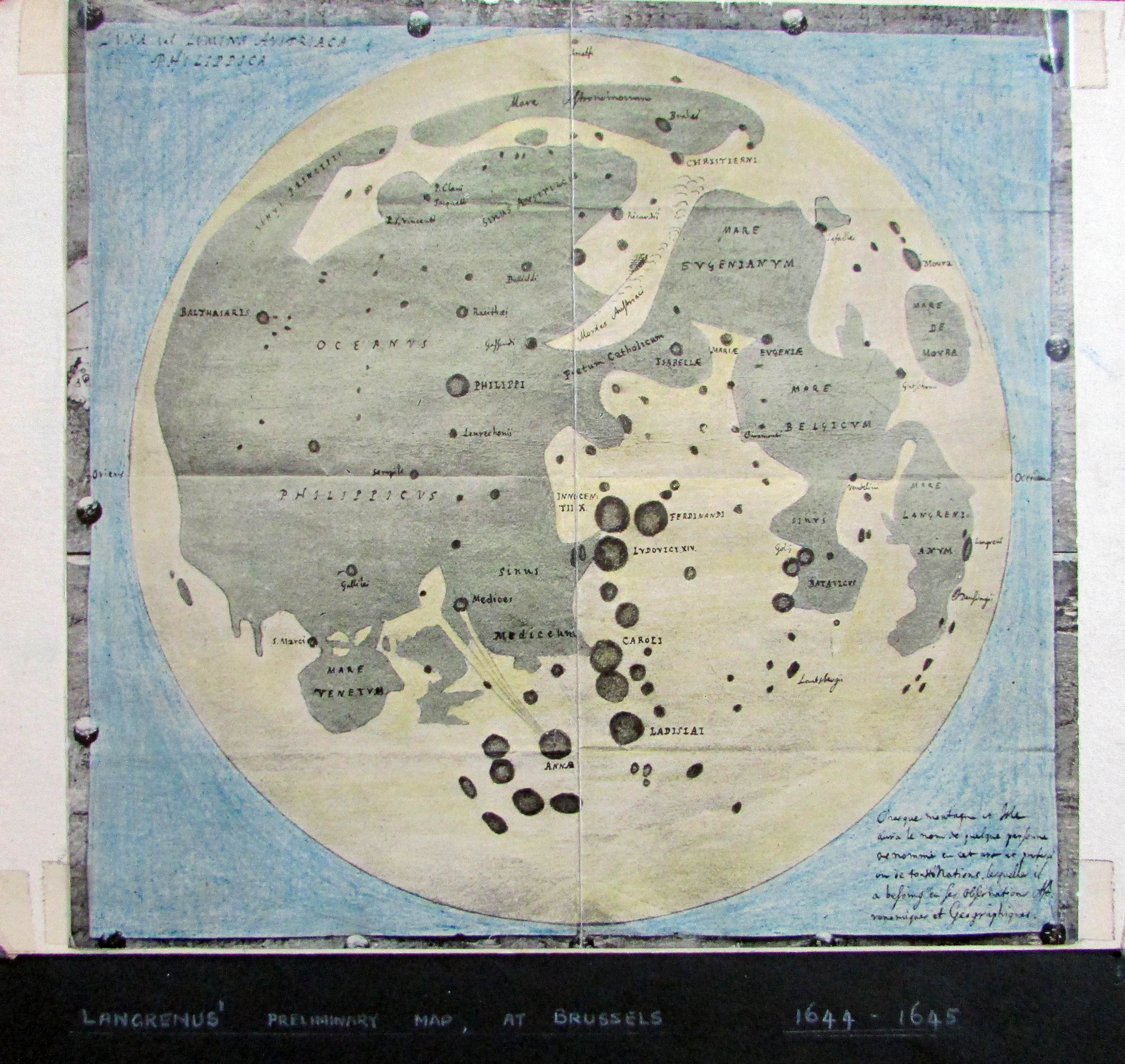 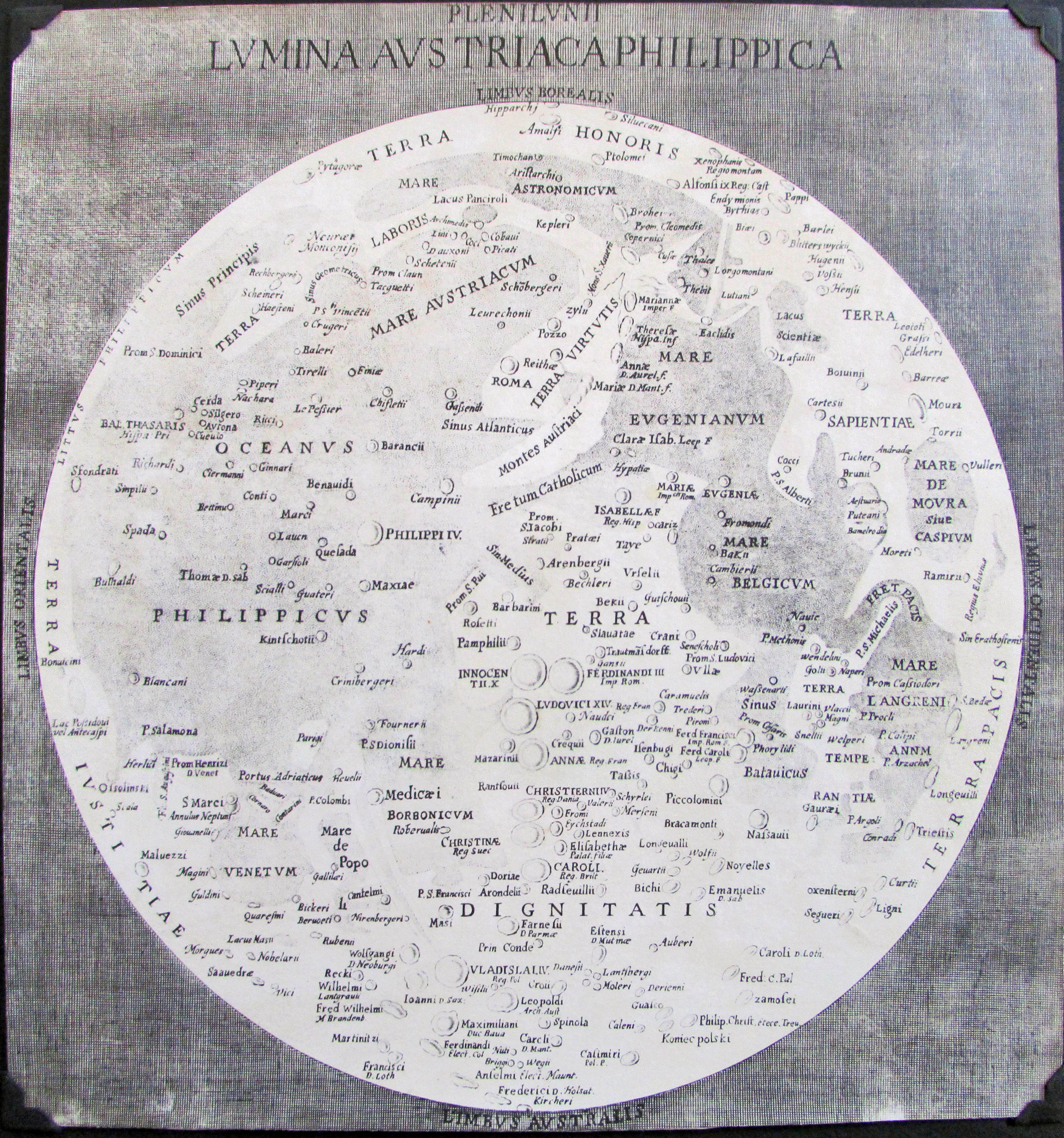 The Strassbourg copy. Courtesy EA Whitaker. It is a “counterfeit map” copied from the original with some names mis-spelled or missing (Whitaker p. 40).

The Digital Museum of Planetary Mapping is  supported by the ICA Commission on Planetary Cartography. We collect maps of other worlds. Curator: H. Hargitai